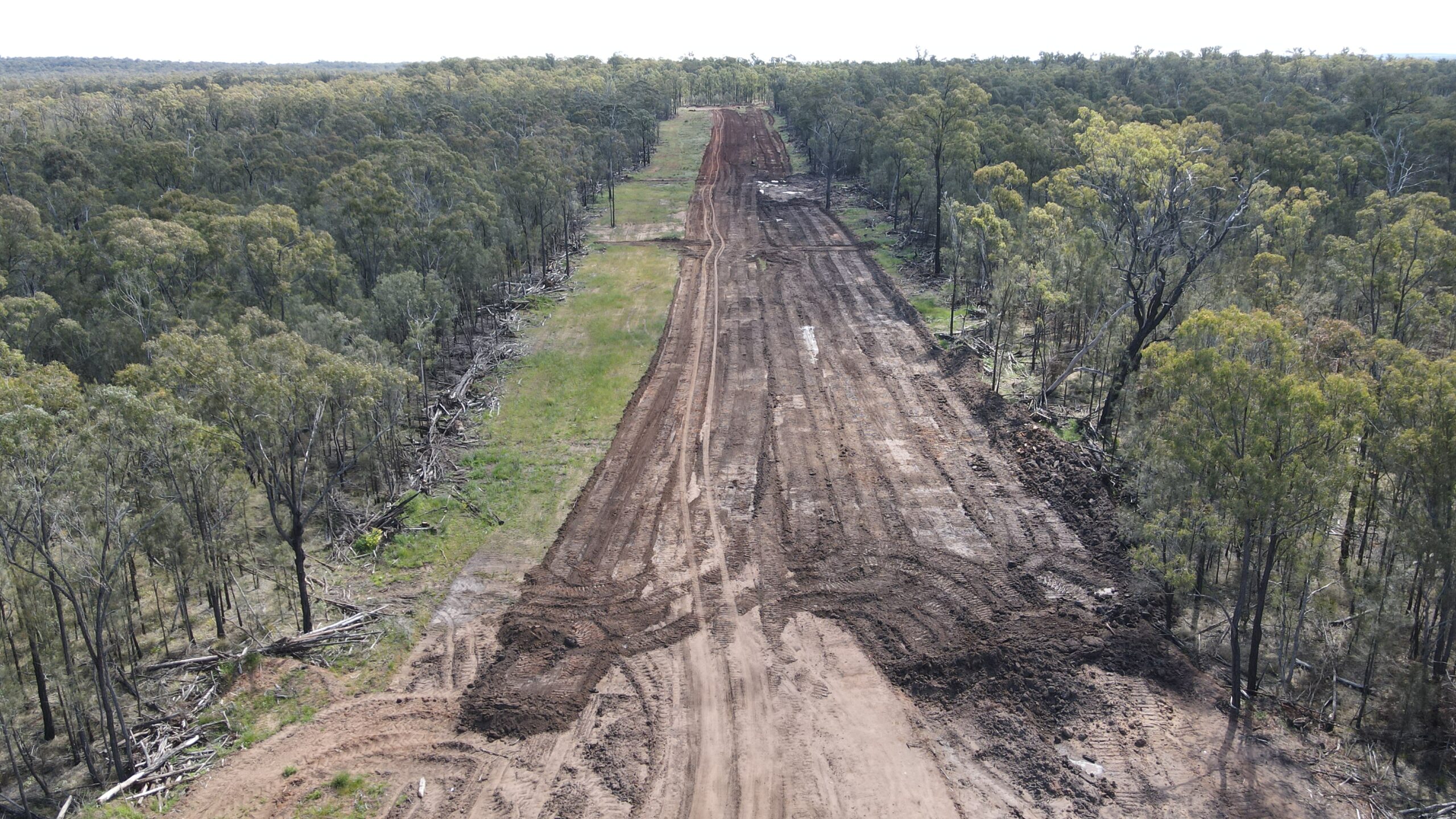 So far the end of September and the first weekend in October has been very productive at Dunmore with “only” 100mm of rain recorded in the past 30-days (bringing the yearly total to over 600mm).

We have an extra weather station online closer to the ranges (with 2 more stations to be installed at each) which you can see via https://www.ecowitt.net/home/share?authorize=V2D4KJ as well as the original Weather Station Zebra via https://www.ecowitt.net/home/share?authorize=1E2JVK. If you don’t like “freedom units” you can change the settings with the menu button in the top-left corner and selecting “settings”.

Return of the Cat

Excavation Equipment put in a huge effort and delivered the Cat back to us on a Sunday so we could get straight back into work and around 1500L of diesel later we’ve had some excellent results.

Contrary to our hopes, several stumps on the 500m range have been too stubborn to be pushed out so the Range Cat will be on digging duties while the ground is still soft.

One of the long-standing issues on the 500m range was the water sitting on the right-hand side around 200m downrange. This has been dug out and recut to drain away with some grading due later this month and this will also improve visibility down the right side of the range.

While not looking fancy by any means, the past weeks have brought the earthworks on the 500M range to around 75% complete.

Videos of the 500m Range

The video below (500m development – part 6) is from August 2022 so will give you an idea of what has changed between then and this month (the next video down) but the focus has mostly been on the leveling and drainage.

Below is the latest YouTube video (500m development – part 7) of the 500m range with a lap forward and back from the firing position. Note: as of posting this the HD version of the clip is still rendering on YouTube so early viewing may be blurry.

Not to be outshone by the 500m range, the 1000-yard has also had its problematic right-hand side trimmed down. While both the firing position and targets are roughly level with each other, there is a 7m dip at the 500-yard mark that’s caused some issues with sighting targets at this distance. With the height being lowered and the dip being filled it has certainly improved.

The video below (1000 yard development – part 4) is from September 1st and again will provide a good progress report over the 30-day period. As with the 500m range, the focus has been on leveling and drainage.

The newest video of the 1000-yard range (1000-yard development – part 5) was recorded (for an unknown reason) in portrait mode. We can assure you that the drone was not sideways (though it did subsequently take up residence in a tree) and through the magic of the internet the clip is still somewhat usable.

In the clip, we start around 1000-yards behind the firing point and follow the old range line down to the remediated area.

For something different, we’ve included some extra photos that haven’t made it to social media. While not as exciting as the videos it’s a little look behind the curtain at Dunmore Range

The last update included a historical shot looking East. Through the magic of drones, we’ve been able to capture the present day.

The photos show the track running through the middle of the site. Where the road disappears on the right side of the photo is the ridge that runs towards the left and forms the backstops of the 500m and 1000-yard range.

The present-day shot is from a recent drone trip across the 5km width of the property (traveling West to East). If you’d like to see the whole trip (about 8 minutes) you can check it out via https://www.youtube.com/watch?v=yLmzsRXvJNU

Facebook Twitter LinkedIn Google + Email
Manage Cookie Consent
To provide the best experiences, we use technologies like cookies to store and/or access device information. Consenting to these technologies will allow us to process data such as browsing behavior or unique IDs on this site. Not consenting or withdrawing consent, may adversely affect certain features and functions.
Manage options Manage services Manage vendors Read more about these purposes
View preferences
{title} {title} {title}